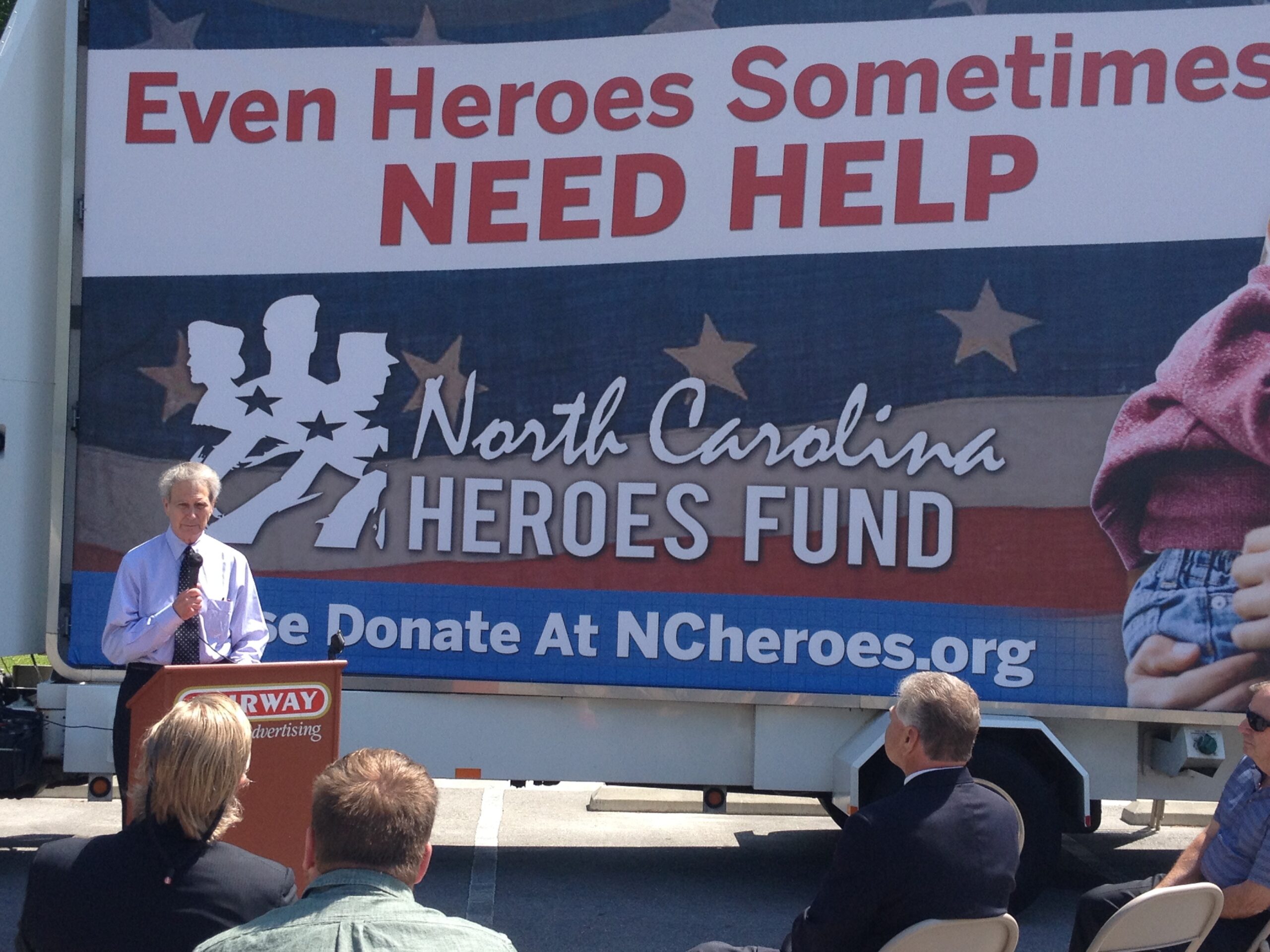 A new campaign is aimed at assisting service members, veterans and their families financially — and raising awareness of the program itself.

On Tuesday, U.S. Congressman Walter Jones and N.C. Representative Phil Shepard met at Lejeune Memorial Gardens in Jacksonville to hold a press conference endorsing the North Carolina Heroes Fund, a nonprofit agency that assists service members, veterans and their families experiencing any form of financial difficulties as a result of their service overseas. During the press conference, it was announced that Fairway Advertising had donated its largest billboard in Onslow County to advertise the fund.

“For me personally, I think about all of the men and women who have served our nation during wartime and that they are coming home needed to readjust for themselves and for their families, and many times money is short,” Jones said. “This fund is one of many organizations that tries to reach out to that service member and their family and tries to help them. They want to help, and that is huge.”

The North Carolina Heroes Fund, he said, is just one more way for the state to show that it is there to help. Any burden, he said, that can be taken off of the shoulders of veterans, service members and their families, is worth it because the stress of returning home is overwhelming.

“My message to veterans on hard times is a sincere thank you,” Jones said. “Whether you have a problem, whether it is post-traumatic stress or traumatic brain injury or a financial problem, reach out to those who are willing to help you. There are too many groups of people who want to help on and off base, so just ask, please.”

Shepard said that, since military service is a family affair, he supports the men and women who deploy, as well as the ones they leave behind at home. Somebody, he said, has to fill all of the roles in the service member’s absence and they deserve all of the support their neighbors can give them.

Shepard said he decided endorse the North Carolina Heroes Fund because whether it involves the service member’s family, their children, a move or transitioning from active duty, all members of the military and their families deserve the United States’ support.

“We see firsthand in our community the sacrifices that our military men and women have made for us to enjoy the very freedoms we enjoy each and every day,” Shepard said. “Because of our military protecting us, if there is anything we can do to support them when they are having a difficult time, it’s worthwhile. Everyone should support this effort and stand behind it.”

Mussoni said that there is a lot of work left to do in order to ensure that veterans are taken care of. America, he said, has a “tragically short” memory and need to keep their American flag stickers on their cars and keep their patriotism high, because men and women are having difficulty transitioning from the military and need help.

“Knowing that we have so many veterans in North Carolina, it is daunting and humbling to see,” Mussoni said. “It is daunting from a fundraising perspective because we need to raise enough money to help them all. It is humbling because they have put their lives on the line and that it is our turn to help them.”

Aaron Guyton, the director of government and public relations for Fairway Advertising, said that a lot of people just don’t know how to help the veterans. He said he hope seeing the billboard will raise awareness of one way to help veterans.

“Our military men and women deserve our support because they don’t get much of a thank you,” Guyton said. “I think this is a great way to thank them and a great way to show them that we care. We’re just happy to be a part of this.”

For more information on the program, to apply or to donate, visit ncheroes.org.