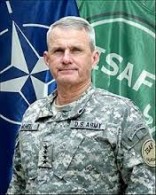 On Wednesday, November 5th we will be holding our Annual Raleigh Heroes Lunch at WakeMed with keynote speaker Gen. (USA Ret.) Dan McNeill.

General Dan McNeill served as Commander of the International Security Assistance Force (ISAF) in Afghanistan from February 1, 2007 to June 3, 2008 before his retirement from active duty. Prior to that assignment, he was the Commanding General of the U.S. Army Forces Command from 2004-2007 and Commander of the Coalition Forces, Afghanistan, CJTF-180, from 2002 to 2003. General McNeill’s overseas assignments include Vietnam, Panama, Iraq and Afghanistan. He was commissioned a 2nd lieutenant of Infantry through the ROTC program at NC State University.  General McNeill is currently President of The Logistics Company in Fayetteville, NC.

Lunch will be from 11:30-1pm in the Andrews Center. Tickets are $100/individual, $1,000/table. Other sponsorships available. Please contact Heather Whillier for more information.